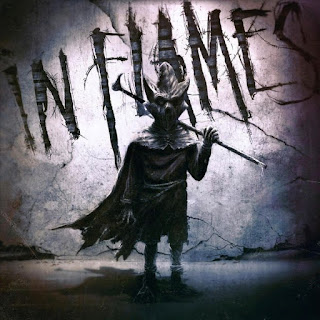 Being an In Flames fan when “Battles” was released was tough. Not just because it sounded as if In Flames had detoured so far from their roots that they appeared entirely inferior to their former glory, but because it was simply a bad album. Laden with innocuous instrumentation and cringe-worthy lyricism, it was exactly what they needed to become a band that is played on the radio, a band that supported arena-sized bands, and a band that solidified itself into the mainstream after (now) nearly thirty years of existence. Unfortunately, for those reasons, it was exactly what made it sound so insipid.

The build-up to “Battles'”successor, “I, The Mask” didn’t reignite much hope, what with the music video for their leading single “I Am Above” looking like it was inspired by Holly from Red Dwarf. Yet, it did signal a surprisingly welcome return to their melodic abrasiveness. Prior to its release, In Flames released another 3 singles from the album, each of which features at least some minute semblance of their past greatness. Looking back, the decision to release 4 singles feels like In Flames are desperately trying to show people they are still worth caring about and that their thirteenth studio album, “I, The Mask” is still worth listening to.

Unfortunately, this album does literally nothing. It doesn’t make the band any better or worse and it doesn’t make them any more recognisable. Other than wincing under how sugary and saccharine parts of the album sounds, it lacks any emotional tangibility and the melodic hooks that were once found in abundance throughout In Flames’ career are now devoid of any sense of character or identity. In short, “I, The Mask” achieves as a much as a hamster running in a wheel. Initially, you’re caught by surprise by the riffs on the first three or four songs on the album as they sound like a pale comparison to 2006’s “Come Clarity”, presenting Björn’s faster riffing and even some admirable blast beats in the title track. However, these features are barely praiseworthy and are only of any value due to of the drastic improvement In Flames display on a few songs compared to the entirety of “Battles”. Better does not equal good.

Finding anything to actually discuss concerning this album is surprisingly difficult because of how lifeless it sounds. In Flames stated long ago that they no longer wanted to make heavy albums anymore, thus, it would be unfair to compare “I, The Mask” to any of their conventionally ‘heavier’ albums released before the millennium. Nevertheless, this album is still bland compared to their subsequent radio-friendly sound that became apparent a smidgen over 10 years ago. Even during the subtle nods to the band’s Jester mascot, which first manifested in their heyday, Anders’ lyrics are weak and sung to the same degree of concentration. Without the lofty choruses scattered across this album, the vocal performance throughout this album would be as horrendously placid as the lowest note on the album: “All The Pain”. Similarly, the same could be said for the instrumentation, only, instead of playing simple and boring riffs and melodies continually, In Flames incorporate one or two genuinely good ideas into a song and then recycle them in every other track in exactly the same way.

Any positive that can be found about this album is actually an excuse in disguise. Arguably, “I, The Mask” is the best album the band has released in 5 years, undoubtedly, this is an enormous improvement in their current trajectory and finally, this album will probably get played on the radio frequently. However, in answer to the above qualities, the album is still disgracefully synthetic, you didn’t have to do much to improve on “Battles”, and finally, this album does not represent the enormous influence In Flames has had not only on modern metal bands but on metal as a whole. That this band has fallen to this level is beyond a joke: it’s an absolute tragedy.