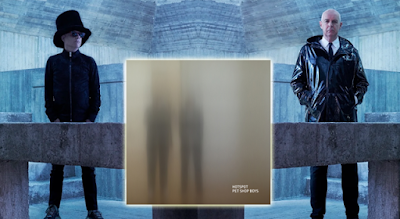 For more than 35 years, Pet Shop Boys singer-keyboardist Neil Tennant has returned to a question of world-historic import: Do I stay in or do I go out? “Turn on the news, drink some tea/Maybe if you’re with me we’ll do some shopping” goes one couplet in 1988’s “Left to My Own Devices.” Observing a teen on “I Don’t Wanna,” a song from Pet Shop Boys’ 14th studio album Hotspot, Tennant sings with his usual starchy plaintiveness, “Feels so shy/He’d rather sit alone and cry/But no one understands this guy.”

Pet Shop Boys do. No other act has so richly documented the cautious development of lonely queer boys whose ambitions—sexual and economic—are as huge as the beats they heard at the club last Saturday night. On the dancefloor, these boys rehearse how to deal with other boys checking them out or abandoning them for hunkier alternatives. Giorgio Moroder’s sequencer lines are lodestars for Tennant and keyboardist Chris Lowe, like Beatles guitar licks were for other acts. On Hotspot, the best-selling duo in UK pop dampen the euphoria; the result is a tuneful, wan album: a mid-tier effort.

Hotspot observes Pet Shop Boys’ pattern of following up a pair of bangers (2015’s Super and 2013’s Electric) with a bagful of autumn leaves. The mid-tempo tunes keep their top buttons buttoned, muted and wary like the sixtysomethings Tennant and Lowe have become. No dictate requires late middle-age to be as fraught as adolescence, but Hotspot puts Lowe’s orchestral synth chords and house keyboard patterns in the service of rote tales of resignation, whose resonance may be dependent on the affection of their listening base. Dismiss “You Are the One” as a sappy little thing if you like; listen generously and you may appreciate the lyric’s affirmations and the mournful way in which Tennant caresses the chorus hook. The object of desire may be “the one,” but Neil’s none too pleased about it. Three decades after he gleefully shacked up with a bloke who may not love him on the catty “Why Don’t We Live Together,” now he weighs the costs.

Hotspot stumbles when Tennant and Lowe convince themselves they need a good time. The interplay between strings, bass synth, and call-and-response female vocal on “Monkey Business” sounds fabulous until Tennant sings, “We’re gonna have a pah-rty!” like he’s a human resources vice president at the Hyatt bar; he’s often played these guys, but now the joke’s not funny. And there’s no reason for “Dreamland,” a duet with Olly Alexander, who as the frontman of synth-pop band Years & Years makes a natural heir to Tennant. So many of Alexander’s songs detail the kind of danger implicit in Pet Shop Boys’ 1993 “Young Offender”: older man getting mixed up with a far younger male lover. Why then is this song such an inoffensive racket?

Perhaps the inoffensiveness is the point. In a post-Obergefell environment where gay youth can imagine a life untrammeled by disease but experience anxiety about kissing in public, tracks like “Wedding in Berlin” (“We’re getting married because we love each other/We’re getting married today”) signify as goal and fantasy. Tennant-Lowe’s incorporation of Mendelssohn’s ubiquitous “Wedding March” registers as a shrewd gesture of queering an original text—not an unexpected move at this point in Pet Shop Boys’ career, but nonetheless a discomfiting one, as inoffensiveness can be too. “Only the Dark,” a shimmering ballad in which Tennant pledges fidelity so long as the lights are out, is better. It’s not the first time he and Lowe have preferred the erotic possibilities of the unseen—a longstanding fascination which speaks to how profoundly Pet Shop Boys revel in paradox as a first principle. So much uncertainty requires consistency.