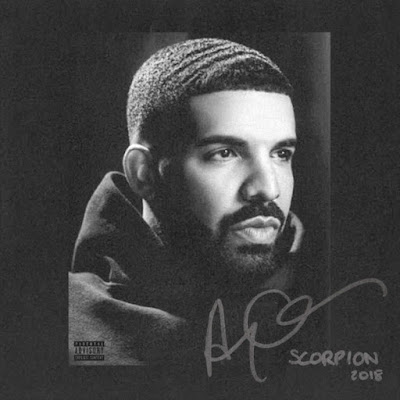 Drake announced the album on Instagram on April 16, 2018, followed by the announcement of its release date on June 14.
Two days before release, Scorpion was confirmed to be a double album, Drake's first, after a promotional billboard alluded to the format. The double album consists of a rap-oriented side and an R&B-oriented side, the two genres that Drake focuses on.
Prior to the album's release, Drake became engaged in a rivalry with American rapper Pusha T. In May 2018, after Drake released a diss track titled "Duppy Freestyle" in response to Pusha T's album Daytona, Pusha T released "The Story of Adidon" which alleged that Drake had a secret child. Scorpion finally addressed the rumor, and later Drake admitted to having a son named Adonis with French model Sophie Brussaux.
The album features guest appearances from Jay-Z and Ty Dolla Sign as well as posthumous appearances from Michael Jackson and Static Major, and additional vocals by a variety of artists, including PartyNextDoor, Future, Lil Wayne and Nai Palm. The album is executively produced by Drake himself, alongside frequent collaborator Noah "40" Shebib and manager Oliver El-Khatib, and features production from 40, alongside a variety of producers, including No I.D., Boi-1da, DJ Premier, DJ Paul, Tay Keith, T-Minus, Murda Beatz, Cardo and Noel Cadastre, among others.