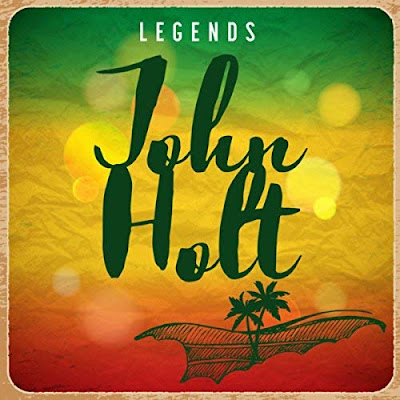 ABOUT JHON HOLT
On an island renowned for its superb vocalists and composers, John Holt stood head and shoulders above the rest as one of Jamaica's sweetest singers and enduring songwriters. He voiced and penned so many of the country's classics that in a way, Holt defined the island's sound. Born in the Greenwich Farm area of Kingston, Jamaica, on July 11, 1947, the young Holt took his first steps into the music business via the talent show circuit. Talent shows have always had a massive popularity in Jamaica and the top ones were initially broadcast live on radio and later on television. Many of the island's greatest artists (Gregory Isaacs amongst them) made their first appearances in talent shows, and it has proved an excellent training ground for young hopefuls.
In 1958, the 12-year-old Holt entered his first contest, run by promoter Joseph Verejohn. Over the next four years, the youngster became a staple of these shows, eventually notching a record-breaking 28 titles. His dulcet tones were soon familiar to a much larger audience, as a number of these contests were broadcasts of Radio Jamaica. For his final victory in 1962, Holt performed Solomon Burke's "Just Out of Reach." The talented teen was quickly snapped up by producer Leslie Kong, who recorded Holt's debut single, "Forever I'll Stay"/"I Cried a Tear." From there, the youngster began working with producer Clive Chin, debuting the partnership with "Rum Bumper," a duet with Alton Ellis.
More singles followed, but none really captured the island's imagination. That all began to change in 1964 when Holt joined the vocal group the Paragons, replacing founding member Leroy Stamp. It was about this time that another founding member, Junior Menz, also departed and his place taken by Howard Barrett. The group's lineup was completed by veteran members Bob Andy and Tyrone Evans, and it was this grouping that recorded "Good Luck and Goodbye" for Coxsone Dodd. Ironically, this is precisely what Andy said to his bandmates soon after the single's release, as he quit the group to pursue a solo career. Now reduced to a trio, and with both Evans and Barrett holding full-time jobs, Holt was entrusted with the dual role of composer and arranger, positions for which he turned out to be ideally suited. And the timing couldn't have been more perfect. Ska was withering under the hot Jamaican sun, with rocksteady rising to take its place. Its slower tempo was perfect for vocal groups and Holt's pen seemed especially cut for the easy going beat and pop flavor that the style embraced. Soon after, the trio linked with Duke Reid, a producer never at home with ska, but the ultimate purveyor of rocksteady.
By 1968, the Paragons were Jamaica's premier vocal group, with virtually every one of their releases a hit. Although the group did record covers (notably "Island in the Sun"), much of their material was composed by Holt and the popularity of his songs is evident by the number of other prominent vocalists who recorded their own cover versions of them. In 1968, Holt set off on a parallel solo career, recording for producers Bunny Lee and Harry J. The following year, the Paragons returned to Dodd, where the trio continued on a successful path. 1970, however, brought an abrupt end to the group when Evans and Barrett both went to the U.S. after being awarded scholarships. Holt, however, merely picked up the pace of his solo recordings, cutting songs for a variety of different producers. His work with Dodd was particularly exemplary and boasts a slew of classics, including "Tonight," "Stranger in Love," and "A Love I Can Feel." The latter song titled Holt's 1971 album, which compiled many of his hits with Dodd. Like a Bolt, released that same year, bundles up recordings done with Duke Reid, including the hit "Ali Baba," which quickly became one of Reid's most-versioned rhythms. Prince Buster cut a number of gems with the singer, including the exquisite "Rain From the Sky," while Alvin Ranglin also recorded a number of charming numbers, notably "Son of the Wise." During this same time, Phil Pratt scored a hit with a re-cut, "My Heart Is Gone," a song Holt initially recorded for Dodd. Arguably the best work the singer recorded in the early '70s was for Bunny Lee, including the classic "Tonight." However, their biggest success was a cover of "Stick By Me," deliberately arranged to take advantage of the latest dance craze, the John Crow. The song stuck to the Jamaican charts for an amazing 23 weeks and became the biggest-selling single of the year.