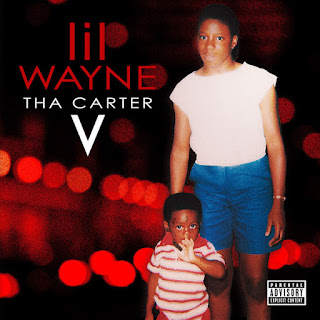 In November 2012, Lil Wayne announced Tha Carter V would be his final album, he previously stated he would retire at the age of 35; he explained that he had four kids and he "would feel selfish still going to the studio when it's such a vital point in their lives".In April 2014, Wayne addressed his Carter V release: "I personally plan on this being my final solo album, yes, and it's definitely the final Carter album. It's the final Carter album. It's stopping at five. I didn't smile when I said it...I plan on it being my final solo album. Whenever I have to pitch in for a Young Money album, a Like Father, Like Son album and something like that and maybe something out the blue, but the way I'm working on this album, it's to me, the way it seems like now, it seems like it'll be impossible for me to work this hard again for anything else.
The Carter V is the twelfth studio album by American rapper Lil Wayne. It was released on September 28, 2018, by Young Money Entertainment, Republic Records and Universal Music Group.The album's features include Swizz Beatz, XXXTentacion, Wayne's mother Jacida Carter, Travis Scott, Nicki Minaj, Kendrick Lamar, Sosamann, Wayne's daughter Reginae Carter, Snoop Dogg, Ashanti, Mack Maine, Nivea, Post Malone, and Gucci Mane.

Originally planned to be released in 2014, Tha Carter V experienced several delays as a result of contractual disputes between Lil Wayne and Cash Money Records, as well as his numerous personal disputes with label-head, Birdman. Following a lengthy legal battle, Lil Wayne was confirmed to have been released from his contract with Cash Money in June 2018 and announced the release of the album in September. The album debuted at number one on the Billboard 200 with the second-largest streaming week for an album.

Maybe more than any other rapper in history, Lil Wayne’s output is defined by franchises. An artist should be so lucky to sustain the kind of longevity that would allow for multi-volume phases the likes of Wayne’s Dedication, and Da Drought mixtapes, let alone the series that made him into a superstar, Tha Carter. Though Wayne was not without projects in between, some seven years were allowed to pass between the release of the fourth and fifth installments of the lattermost. Fortunately, Wayne has rewarded his fans’ patience with 23 tracks that speak to a number of his most storied eras.