Penulis Phurix Diterbitkan December 09, 2018
Mark Knopfler - Down The Road Wherever 2018 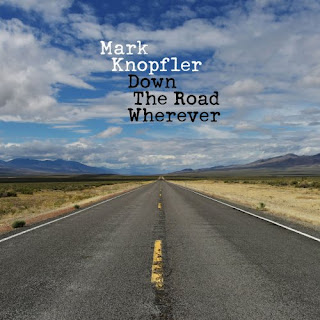 The album was announced in a press release, which called it a collection of "unhurriedly elegant new Knopfler songs inspired by a wide range of subjects, including his early days in Deptford with Dire Straits, a stray football fan lost in a strange town, the compulsion of a musician hitching home through the snow, and a man out of time in his local greasy spoon." The 14 songs were also called "slow and elegant".

Musicians that play on the album include Jim Cox and Guy Fletcher on keyboards, Nigel Hitchcock on saxophone, Glenn Worf on bass guitar, Danny Cummings on percussion and Ian 'Ianto' Thomas on drums. Imelda May also provides backing vocals.

Mark Freuder Knopfler was born in Glasgow, Scotland on August 12, 1949. His father, a Hungarian émigré, worked as an architect, while his mother, of English heritage, was a schoolteacher. The Knopfler family moved to England when Mark was seven years of age, settling in Newcastle-Upon-Tyne, and he developed a passion for music while spending time with his uncle; as he told journalist Dan Forte, "I heard my Uncle Kingsley playing boogie-woogie on the piano when I was about eight or nine, and I thought that those three chords were the most magnificent things in the world -- still do." A few years later, Knopfler began learning to play guitar, first on an inexpensive Hofner model before moving up to a Fender electric his father bought for him. At 16, Knopfler and some pals cut a demo single that was never released, and he performed in a vocal group that was successful enough to merit an appearance on local television.