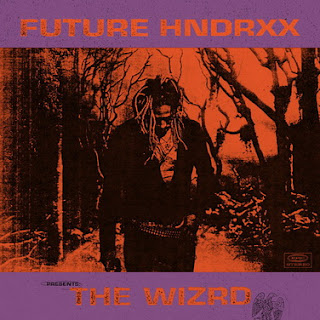 Future’s career has reached its plateau. He’s still popular, still relevant, still scoring hits, and rap, as it exists now, has been remade in his image, with at least three artists on the Billboard charts making their name out of repurposed bits of his style. But the minute you’ve peaked, rap music starts waiting impatiently for you to disappear. Many rappers before Future have faced this moment—T.I. in 2007, Kanye West in 2015—where, as far as their public is concerned, their hero’s story is concluded and they are free to cede the stage. It’s a difficult corner to fight your way out of: There is no obvious adversary and you are still revered around the world. But all that lavish praise must begin to feel suspiciously like someone throwing your retirement party for you.

Future Hndrxx Presents: The WIZRD, Future’s first full-length studio album since 2017’s dual chart-toppers FUTURE and HNDRXX, isn't the first time you sense the relentlessly productive and innovative artist might be treading water. But it is one of the first moments you could be forgiven for wondering when rap’s remorseless current might finally leave him behind. Over the album’s 20 tracks, we are offered top-shelf or near-top-shelf versions of a variety of Future staples: The grinding and amoral banger (“Baptiize,” “Faceshot”); the strangely melancholy anthem about how lonely it feels to customize your Bentley (“Ain’t Coming Back”). The production is muted, minor-key, and consistently beautiful, conjuring the familiar Future Moods: rain-streaked neon signs, drug-induced stupors inside of clubs at 3 a.m. If you are content to live inside this lonely little world Future has made, he is still keeping it nice for you.

What you won’t find on The WIZRD is the sound of Future stretching or surprising himself. There isn’t anything like the divisive, nervy little “la-di-da-di-da” mouse-squeak he tried out on “King’s Dead.” He is running some of these routines back for the tenth or the hundredth time, and there are a few moments on The WIZRD where he sounds downright bored: “Jumpin on a Jet” is a pretty rote rundown of his spoils, a song he has made countless times, and it’s hard to hear any investment in this version of it. He sounds relieved the second it’s over.

Part of this problem is that if you’re playing a depraved heel, you had better play it to the hilt—a half-hearted villain is just an everyday asshole. Future still talks about women in a way that makes it hard to not taste bile in your throat sometimes: “Real fine mixed-breed, I can’t wait to hit it,” he says on “Goin Dummi,” while “Temptation” subjects you to the line “She gave more head than a tumor.” These moments are reprehensible without being compelling, which is another problem Future runs into every few years.

Still, Future’s throwaway images are crushing and vivid. “Fucked around, parked the ’Vette, and didn’t even get back in it,” say, or, “I just took an AK to a dinner date.” “Nobody done notice till the jet was in the sky,” he sings on “Never Stop,” an arresting little snapshot of missed opportunities. He knows how to stick phrases directly into your brain grooves: “Diamonds in the face, crushed up: I can see it.” No one in rap makes you see it quite like Future does. The production is fearsomely potent, and a few of the best tracks turn on the “mid-song beat switch” trick that is popular again, likely thanks to Travis Scott—“Baptiize” and “F&N” turn from pretty to menacing inside one heartbeat, to thunderous effect.

The WIZRD is too long, of course, and not sequenced in any significant way. But at roughly the halfway point, Future indulges in a classic veteran-artist trope, the song where he declares himself a father figure to the sniveling, ungrateful new batch of copycats. The song is called “Krazy But True” and on it, he points out—correctly—that he is the reason for “your socks, rings, and your lean/The way you drop your mixtapes, your ad-libs and everything.” So it’s disorienting and somehow a little deflating when, a few songs later, one of those copycats, Gunna, pops up alongside Young Thug on a track called “Unicorn Purp.” Hearing the three of these artists, one after the other, is like watching a nesting doll of influence unpack itself before you. Later, Travis Scott appears, another artist who sprung partly from Nayvadius’ rib. These are his children, he is their idol, and someday, one of them is going to A.I. him for their survival.
Back to home
File Informnation:
Artist : Future
Album : Future Hndrxx Presents: The WIZRD
Genre : Hip-Hop/Rap
Tracks : 20
Quality: Mp3 320kbps
Total Size :144 MB