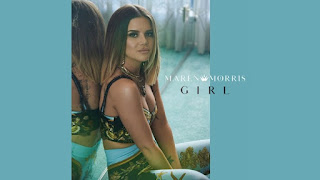 Maren Morris has taken country music by storm over the last three years. Her debut album, 2016's Hero, was one of the best country albums of this decade, spawning a handful of sleeper hits, including the number one country hit "I Could Use a Love Song" and top 5 hit "Rich." Then she sang vocals on "The Middle", which nearly scaled the summit of the Hot 100 and further catapulted her name into popular consciousness. Now returning with her follow up album Girl, Morris picks up where she left off, bringing back all the hallmarks that made her last project a heavenly listen, while showing off the ways she's improved as both a vocalist and a playwright.

Maren was never going to pander to whatever radio trends are going. As was seen on Hero and is realized on Girl is a melting pot of genres and lyrical content. Maren might draw comparisons to Kacey Musgraves for writing about things that'll get you blacklisted from the airwaves, but her candle burns brightly on its own. The album's opening title cut "Girl" is an accessible song of empowerment, encouraging every listen to keep their heads high, "cause everything's gonna be okay," Maren aptly promises.

Elsewhere, Morris shows off how things have changed on her hand over the last few years. Now married to fellow country artist Ryan Hurd, she takes opportunities to thank him for what he's done for her. On "The Feels", she taunts him with the want to throw her inhibitions to the wind and take things to the bedroom, backed up by smooth basslines that conjure up fond reminders of several cuts off of Hero. "All My Favorite People", featuring Brothers Osborne, might remind you of "Follow Your Arrow", but Maren makes the idea of rolling a blunt and letting loose a lot more fun and liberating.

"A Song for Everything" has a soft key driven melody and it plays like a representation of Maren's whole identity as a musician. She's co-penned every album cut she's sent out thus far in her career and at times, she can extend an olive branch to the listener and give them the words they may have fallen just short of saying themselves. "When you were looking for the words, somebody said it first, so you didn't have to. It was looking right at you," Maren tells the listener. "Flavor" is another embodiment of Maren Morris' spirit coming to light in the form of words. She sings about her originality and it's a particularly endearing cut. "Makin' a mess, straight out of scratch, think what you think about that," she playfully proclaims, not caring one bit if you disapprove.

"Make Out with Me" is one of the poppier cuts on here, featuring some particularly bubbly keys and more sultry lyrics from Maren. "Gold Love" follows the same mold with some bluesy guitar riffs, but this one's equipped with one of Morris' best vocal performances of her career. Showcasing her range, gracefulness, and her vocal runs are heavenly. She is easily one of the best singers going right now, proving she is worlds better than some household names who are twice as popular.

"Great Ones" is one a few songs Ryan Hurd co-penned for his wife and it's fitting that it's another cut in which Maren confirms their bright future together. She does it again on the late album highlight "The Bones", which is hands down the best song on here. "We're in the home stretch of the hard times," she proudly tells him, assuring their love can weather any storm. "The house don't fall when the bones are good," she continues, in what is another one of the best vocal performances of her career.

"Good Woman" and "Shade" close out the album with more of the southern rock overtones that have eerily enriched some of Maren's music previously. Once again isolating her husband with the promise of tomorrow, she assures him she'll never leave his side with some beautifully done violins shining through on the chorus of "Good Woman", "Shade" brings things to a curtain call with Maren Morris feeling strengthened by her newfound happiness.

Girl is another one of country's best albums put out this decade. Retaining all the quirk and charm that made Hero so accessible while pushing the boundaries of country music further, Maren Morris is a changed woman on this record, both musically and personally. She was confident before, but this album finds her happy with where life has led and optimistic for what's in store. She expresses gratitude to her husband, shrugs the naysayers off like a speck of dust and empowers the listener to follow her example. Any other artist on country radio would have failed horridly at trying to scratch the surface and giving the listener something emotional to latch on to, but Maren Morris keeps it earnest and real in her approach. One thing's certain; this listener is eager to chase the sun a little more every day and I have Maren Morris' fantastic sophomore masterpiece to thank for that.