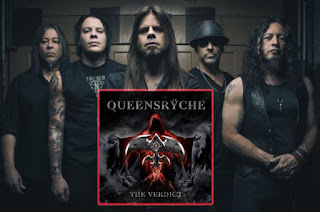 QUEENSRYCHE is a band with a very interesting musical evolution. In their early years from that epic debut EP all the way to “Empire” (1990) they gained worldwide recognition and popularity (including three Grammy nominations), reaching a creative peak with their masterpiece “Operation: Mindcrime” (1988). The nineties were a time of big changes and experimentation with irregular results and many people thought that the band would not recover its level after the departure of Chris de Garmo, founding guitarist and writer of some of their finest songs.

Conflicts within the band led to a crisis that culminated with the departure of iconic vocalist Geoff Tate in 2012, including a legal battle for the name of the band that the three remaining founding members eventually won. After the arrival of Todd La Torre, who had the almost impossible mission of replacing one of the most celebrated voices in rock history, the Seattle-based group has released two solid albums, “Queensrÿche” (2013) and “Condition Hüman” (2015), allowing them to start fresh again despite their long career.

In this context we analyze “The Verdict”, the third studio release of this renewed QUEENSRYCHE, which will be soon available via Century Media and includes a major change. For the first time, the founding drummer Scott Rockenfield did not participate in the writing or recording of the album after starting an indefinite recess following the birth of his son. The most interesting thing is that his role was taken by Todd La Torre himself, who has played drums since his teenage years, although it is worth to clarify that Rockenfield has not officially left the band.

“The Verdict” begins in a surprising way without any kind of introductions and the first track ‘Blood of the Levant’ opens with a hypnotizing guitar riff and a midtempo rhythm section, joined by the powerful voice of La Torre, who shines with his high-pitch screams and tons of attitude. Despite the obvious similarities with Tate, La Torre has developed his own style, perhaps more energetic and aggressive, and let’s not forget the fifteen-year difference. Guitarists Michael Wilton and Parker Lundgren complements each other perfectly when it comes to harmonies and solos. A very promising start.

‘Man the Machine’ becomes immediately one of the highlights of the album with its fast pace, catchy melody, and a very inspired La Torre behind both microphone and drumkit. It is understandable that this track was chosen as the first single of the new album, since it works as a true statement by the band. The approach is quite straight forward and ‘in-your-face’, full of energy and without allowing any unnecessary fillings or excesses. I look forward to hearing this song live, because it is meant to be chanted and to bang your head.

With ‘Light-Years’ they slightly slow down thing and explore the more progressive side of their sound, with more complex time signatures and multiple changes of intensity. Eddie Jackson gets extra credit for his bass arrangements and I don’t get tired of insisting on the amazing performance of La Torre on drums, bashing any possible doubts some may have had about his capacities. ‘Inside Out’ surprises us with its creeping Middle East-inspired melodies, gaining momentum towards the chorus. The work of the guitar dynamic duo before the final section might be the most remarkable side of this track.

They continue with ‘Propaganda Fashion’, which kicks out furiously at full speed and with lyrics that criticize the current state of our society. The ‘in-your-face’ approach to their songwriting is striking, far from the excesses that characterized the albums between “Promised Land” and “Dedicated to Chaos”. Then we get what I consider to be the masterpiece of the album, I’m talking about ‘Dark Reverie’. It’s a track that summarizes the best elements of QUEENSRYCHE, with a dark mood, a very melancholic vocal line and an impressive display of musicality. The background keyboards remind me of their eighties sound.

‘Bent’ starts with a strange noise that will make you suspect that the cable of your headphones has broken. It’s a rather intricated and lengthy song, showing a more complex structure and notable changes of atmosphere and tension. Todd La Torre shines again with his wide vocal range fluctuating from a deep voice to impeccable high notes. ‘Inner Unrest’ is also a song that opens in a promising way with lots of groove, catchy guitar riffs and contagious beats, but in the long run becomes a bit repetitive and tedious.

‘Launder the Conscience’ is another highlight of the album, recovering energy and momentum with its accelerated pace, including an inspired instrumental section towards the end that really stands out. The keyboard sound that dominates the sound blends perfectly with the last track. We are talking about ‘Portrait’, a more experimental track that brings the calm after the storm following such a display of power, an ideal way to give closure to this musical experience. It is worth mentioning that the special editions of the album include a series of bonus tracks, such as previously unreleased studio and live tracks.

In conclusion, “The Verdict” shows a band with a very strong core and great confidence in their abilities, also returning to the heavier and more straight-forward sound that fans always appreciate. Once again, I emphasize the enormous contribution of Todd La Torre, who has taken a leading role in the band in terms of songwriting, vocals and now drums. We hope to hear good news from Scott Rockenfield in the future, and that he rejoins the band at some point, as he represents a vital part of the sound and history of QUEENSRYCHE.

I dare to say that “The Verdict” is their best work to date with La Torre and arguably their finest since “Empire”. Although not all the songs reach the quality and novelty of their classic albums, there are no boring moments or tracks you might feel to skip. I think they have taken a big step in the right direction by putting aside those excessive lethargic sections of low intensity that characterized the sound of QUEENSRYCHE from the nineties till the departure of Geoff Tate. With much pleasure, I can affirm that the Queen of the Reich has returned in all glory and majesty.