Penulis Phurix Diterbitkan March 12, 2019
The Decemberists - I'll Be Your Girl 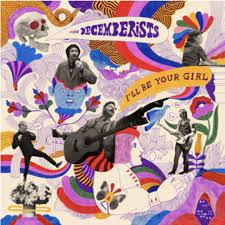 Late on I’ll Be Your Girl, there’s “Rusalka, Rusalka / The Wild Rushes,” a narrative suite based on an old Slavic parable about a mermaid who seduces men only to trick them into drowning. Over eight minutes brimming with dramatic tension and florid prose, Colin Meloy profiles two victims, one a willing sacrifice aroused by his fate, the other naïve and unsuspecting. “Your brow tressed in flowers, pale in a liminal moon,” he sings, setting up each death with the patience of a master storyteller, relishing the suspense until the track finally erupts into fits of grandiose, polyphonic folk.

The Decemberists used to live for these sorts of epic, carefully scripted flights of historical fantasy. A decade ago the band might have even dedicated an entire album to this murderous mermaid—you can almost hear the Baltic instrumentation and picture the lithographed cover art—but here the song is just a pit stop on an album that otherwise avoids the excesses of yore. Since hitting peak fancifulness on 2009’s The Hazards of Love, the Decemberists have streamlined their music into something more direct and less fussy. Rather than carry on like the world’s most overqualified LARP convention house band, they’ve adopted a nomadic approach, running with whatever muse that presents itself at the moment. It’s a bittersweet tradeoff: They had to evolve to keep things fresh, even though whatever they do next is unlikely to be quite as memorable as what came before.

Even more so than the two albums that preceded it, I’ll Be Your Girl is a grab bag, teasing a number of directions without committing to any of them. As part of their drive to shake things up, the band subbed out longtime producer Tucker Martine for John Congleton, an indie ringer and chameleon who feeds on sonic extremes. It’s not the most natural fit—his best projects, like his bristly collaborations with Xiu Xiu, St. Vincent, and Swans or his own unnerving albums with Paper Chase, have more of an edge to them than anything in the Decemberists’ catalogue—but pairing him with a fellow music obsessive like Meloy presents some intriguing possibilities. If any combo can conjure an aesthetic that's novel and specific, it should be this one.

The record presents its boldest idea upfront, with a run of opening tracks that tease a potentially radical synth-rock reinvention for the group. Meloy has cited New Order and Depeche Mode as influences, but the vast, rolling synthesizers on “Once in My Life” are closer in spirit to Berlin’s “Take My Breath Away” or Pretty in Pink-era Orchestral Manoeuvres in the Dark, reference points that aren’t nearly as glamorous on paper but are far more interesting in execution. For a while, there’s an almost subversive thrill in hearing those gaudy, artificial synthesizers bleed through the group’s once folky, acoustic sound. Within a few songs, though, the shock of the new wears off, and the band begins to default to familiar influences. Three consecutive songs give off strong whiffs of R.E.M.: “Severed” (it’s got a moody, “Driver 8” sort of vibe), “Starwatcher” (very Document), and “Tripping Along” (the album’s Automatic for the People moment).

I’ll Be Your Girl is intermittently political in its own way, even though beyond the special thanks to Special Counsel Robert Mueller tucked into the liner notes, it only addresses politics in the broadest sense. Instead, Meloy captures the general frustration that the world is just kind of shitty right now. “For once in my life…could just something go right?” he sings, invoking the first of the album's many Charlie Brown-isms. He takes that same chipper nihilism to silly extremes on the record’s most confounding inclusions: a pair of “fuck everything” anthems inexplicably executed like kids songs. The sickly sweet “Everything is Awful” is basically a novelty romp—Meloy’s answer, perhaps, to that manic theme from The Lego Movie—while “We All Die Young” sets a dopey Jock Jams beat to a Kidz Bop cheer-along.

Taken on their own, those songs aren’t too much of a stretch. Plenty of Decemberists fans have aged into parenthood, and it’s really not hard to imagine a future where like They Might Be Giants, another favorite of the “Wait Wait... Don’t Tell Me!” set, they begin recording kids albums. Judging from I’ll Be Your Girl, they’d probably be great at it. But the fact that they’ve basically sandwiched a couple of kids tunes into the same album as a suite about a killer sex mermaid only highlights how confused and directionless this band is right now. Where they once specialized in meticulously plotted albums, now they mostly seem to be winging it. They’re still making some alluring music, yet their albums have never sounded more disjointed.